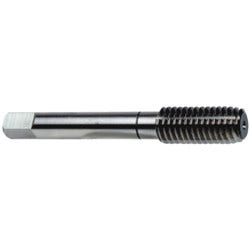 Thread forming taps are designed to displace material by pressure rather than cutting the material away. Also known as cold forming taps, they have a fluteless design which is well-suited for blind holes since there are no chips to evacuate. Tool life can be three to twenty times longer than traditional taps, and thread forming taps can be run at faster spindle speeds for higher production rates at less cost per hole. Suitable for use in ductile materials without chips, such as aluminum, brass, copper and zinc - generally, materials which provide a continuous chip when drilling work well with these cold forming taps. Available in standard and Metric models.